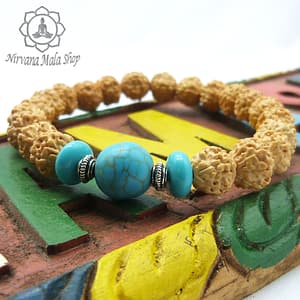 The beads are measured at 8 mm each

There are 18 beads, excluding the Resin amber spacer

The thread is Maroon in color with an adjustable knot

The seed is produced by several species of large evergreen broad-leaved trees. They are associated with the Hindu deity Lord Shiva and are commonly worn for protection by his devotees. Rudraksha creates your very own insurance vitality and shields the wearer from negative energies. The mala can be worn constantly and incorporated into the shower. Perceptive Hindus may take after different tenets while wearing a Rudraksha dab, for example, avoiding eating meat and liquor, as a feature of the picked way of life. Single rudraksha mala might be worn around the neck as assurance, or on the skin in different gems, for example, arm ornaments and hoops.

A yellowish or brownish substance is obtained from the gum or sap of some trees (such as the pine) and used in varnishes and medicine. Various manufactured products are similar to natural resins in properties and are mainly used as plastics.